The Bright and Shiny Radio Show

Show material was previewed in front of a local audience on Thursday 20th May at the Bull Hotel, Market Square, Olney.

The Bright and Shiny Radio show is a sketch show performed under the guise of a Radio broadcast. A cast of five brings you original sketches, songs and silliness ranging from environmental-friendly assassins to exploding budgies (a great gag for a radio show!).

David Lovesy, writer and performer wrote of the Festival experience: “It’s given us focus knowing that we had the Fringe as a deadline. We all enjoy writing and performing together and we’ve had a great time putting the show together which we hope comes across.”

The experienced cast has covered a lot of ground between them: everything from Stand Up to Story-telling and from Musicals to Murder Mysteries is in their background.

As much as they love performing, the writing of the show has been just as pleasing according to another of the cast. Brian Two: “There is something about finding an idea that makes your mates laugh out loud that is very satisfying. We all know each other really well so if we can find an unexpected twist that catches them out, there’s a good chance it will work with an audience”

The script for this show is available to purchase through TLC Creative. 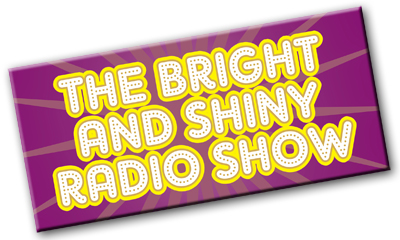 Here is what the Buxton Festival reviewer wrote about us:

“Stripped of a working PA minutes prior to transmission would force most radio stations Off-Air – not this Bright n Shiny quintet who bravely choose to broadcast nonetheless. It’s testimony to their polished delivery and performance that we never consider retuning, maybe it’s the rarified atmosphere! There’s an infectious enthusiasm amongst the company which translates  into audience goodwill – throw in material that’s primetime Radio 4, and you almost feel the license fees justified. The material’s as safe as houses and is never threatens controversy – even the Muslim bomber has to buy a carrier bag.

Some 26 sketches later, we’ve dealt with traffic wardens, nanny state legislation and a fair number of job interviews as well as experienced a large chunk of WW2. Established targets take precedence over the contemporary and the bash-the-celebrity list is B-lifted straight from Heat magazine, yet the audience enjoyed and even the hardest souls were singing along to the closing Station jingle… and they even had the decency to admit to an act of Pythonesque plagiarism.

This isn’t designed to be the cutting edge of satire, but it’s a high quality transmission which pokes fun without threatening to remove your comfort blanket – the staging and venue add to a sense of live broadcast and the sheer physicality of performance means it’s hard to simply listen.”